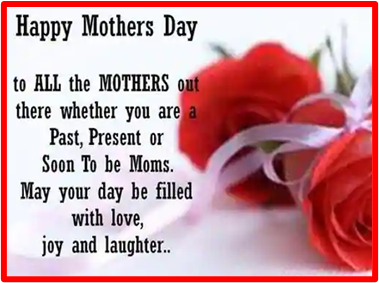 To all the workers out there,
Happy Worker’s Day on 1 May 2022!
Enjoy the public holiday on Monday, 2 May 2022.
Without the ordinary men and women of the working class,
the elite class would not be so elite!


Mother’s Day originated on 12 May 1907 because of the efforts of Anna Jarvis, who held a memorial service for her late mother at a church in Grafton, West Virginia. In 1914, Mother’s Day became an official holiday in the United States and today it is celebrated all over the world. Anna was, however, furious when this day became so commercialised, so much so that she spent her remaining years trying to remove it from the calendar.

Let us honour Anna’s original intention for this day by devoting time, love and TLC to our Mothers. Life is unpredictable, so we never know if we will have this opportunity again.

To ALL the MOTHERS out there whether you are a Past, Present or Soon To be Moms. May your day be filled with love, joy and laughter.

URGENT MESSAGE
We need to once again emphasise the importance of not changing the PDF Wills’ templates, which are sent out for signature by Legatus Trust Wills drafters. If any changes are required to these Will templates, please send the templates back to your Wills drafter to make the changes for you.

It is not possible, or practical, to check each Will from start to finish against the templates when a signed Will is returned for safekeeping. Our relationship with you is built on mutual trust. Therefore, we trust that you will not change the contents of a Will without our knowledge. Changing a Will without our input could have dire consequences on a testator’s estate should the changes not be valid, or not meet the requirements of a legally-binding Will.

We appreciate your co-operation in this regard and look forward to receiving your original signed Wills for safekeeping regularly.
FIVE REASONS WHY A PARENT SHOULD MAKE A WILL
Read more about this in the next edition
FIVE REASONS A WILL COULD BE CONTESTED

It is often said that a Will is one of the most important documents one would need to sign in one’s lifetime. And rightfully so. It is important to create a valid Will to ensure one’s assets (possessions and finances) are distributed according to one’s wishes after one pass away. Unfortunately, even if there is a valid Will, signed and witnessed correctly, there is still a chance that someone could contest it. According to probate law, Wills can only be contested by spouses, children or people who are mentioned in a Will or a previous Will (if not revoked). A Will must be contested within six months after the passing.

The following are reasons why a Will could be contested:
1.         Failing to update a Will after a major life event
Once a Will is created, it is often stored away with the idea of having it out of sight and out of mind. Most people do not want to linger on the thought of death. This is not a wise approach to such an important document. A Will should be revised on at least an annual basis. Should major life events take place in between (like, getting married or divorced, having a biological or adopted child, receiving a large endowment, or obtaining a significant amount of real estate), the terms of the Will should be re-evaluated.  Not taking these changes into account can have far-reaching consequences on the estate. Often people undergo changes in life and neglect to amend their Wills. Changes like:
2.         Failing to revoke previous Wills
It is common for one to create several Wills during one’s lifetime. Revocation is a very important part of a Will. There should be an express revocation of all earlier Wills or codicils in one’s latest Will. Should this clause not be in the latest Will, it is a general rule confirmed by the court that where a testator dies leaving more than one Will, the Wills must be read together and reconciled. The provisions of the earlier Will are deemed to be revoked in so far as they are inconsistent with the provisions of the later Will. That is why it is important to have a Will drafted by a professional who will ensure that every Will includes a revocation clause. If a Will is not correctly drafted and executed it can result in a dispute, which can end up in the Supreme Court or even the Constitutional Court - at great expense to all parties involved. Even though a Will does not need to be dated according to law, it is still important to date the Will to determine which Will reflects the last wishes of the deceased.

3.         A deceased’s mental state is questioned
A Will may be contested if there are suspicions that the testator lacked the mental capacity or was not of sound mind when the Will was signed in the first place.  Mental capacity refers to the fact that the testator was mentally healthy when they signed the Will. Sound mind refers to the fact that the testator was able to understand the contents of the Will and used logic and reason to create it. That is why it is important to create a Will when a person is still fit and healthy, and not to wait until there is a serious illness or a person is close to death. In these circumstances it will be easier to dispute the validity of the Will on the grounds of illness, old age or mental incapacity, as it will be easier to suggest that the testator’s state of mind may have altered.

4.         If the Will contains fraudulent terms or shows signs of undue influence
If it seems as if the Will has been tampered with and is not genuine in some way, there will be grounds to contest the validity of the Will. Fraud or undue influence could mean that:
5.         Some terms in the Will are illegal
Any stipulation in a Will which contradicts the laws of the land gives way to contestation. For example:

Stipulations or provisions which go against good moral values or are discriminatory in nature based on race, religion or gender would be invalid. Attempts to rule from the grave or even downright illegal stipulations, are all grounds on which a Will can be contested. For example:

It is not difficult to avoid contestation. Update your clients’ Wills regularly, keep up with the laws of the land, and be responsible regarding the contents of a Will.


KING OF THE SMOKERS

Imagine being so besotted with tobacco that specific instructions regarding smoking would be stipulated in a Will. The story of the wealthy Dutch tradesman, Mr Klass, is for all the avid smokers out there. Mr Klass was known as the “King of the Smokers”. Unsurprisingly, he made more than a few smoke-related requests in his Will:
Until next time!
“The Legatus Times” Team