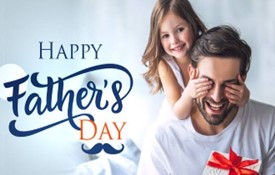 We will be celebrating Father’s Day on Sunday, 19 June 2022. It is interesting to note that Father’s Day came into existence because of Mother’s Day. Sonara Smart Dodd dedicated a great deal of her life advocating for a day when fathers are honoured as well. The idea was welcomed by retailers who were already inspired by the great profits to be made from Mother’s Day sales. Father’s Day was officially declared so by President Robert Nixon in 1972 when he signed a Congressional resolution declaring the third Sunday in June as Father’s Day.

We wish every father an enjoyable Father’s Day on 19 June. We trust that you will have a wonderful time with your loved ones on this special day.


"A father is neither an anchor to hold us back, nor a sail to take us there,
but a guiding light whose love shows us the way."

SIGNED WILLS
We would like to reminder that original signed Wills must be returned to EFBOE as soon as possible for safekeeping. This is also to eliminate unnecessary follow ups around outstanding Wills.

An urgent request: Please do not hoard original signed Wills but send them to EFBOE as soon as possible after they have been signed. If you need assistance with the delivery of Wills to our offices, please contact your marketers: Dawie Roux in the Gauteng and inland regions, and Marie Eksteen in the Cape and coastal regions. Collections can also be arranged.

We appreciate your co-operation in this regard.

June is Youth Month in South Africa. Youth Day is a public holiday, which will be celebrated on Thursday, 16 June 2022. This public holiday came into existence in 1995. According to South Africa’s National Youth Commission Act of 1996, the youth is defined as those between the ages 14 and 35 years. That being said, the saying goes that “you are only as old as you feel”. We hope everyone enjoys and celebrates this day with the youth of South Africa!

“The working youth is critical to our future. The economy depends on you.
With your hard work and efforts at improving your skills,
you can make ours one of the most prosperous nations in the world.”
Nelson Rolihlahla Mandela
THE TERM ‘SPOUSE’ AND NEW MARRIAGE LAWS IN SOUTH AFRICA
Read more about this in the next edition


FIVE REASONS WHY A PARENT SHOULD MAKE A WILL

Some parents are more conscious of their mortality and follow the route of planning properly for the event of dying and providing for the loved ones left behind. However, for most people, life is a constant race, and as parents, their plates are already full. Death is the last thing on their minds while still young and busy building a future, a life together. The thought of death and Wills are sometimes left on the backseat while attention is given to more immediate concerns. For parents, making a Will is still the single-most important thing they can do to ensure that their child/children and immediate family are cared for after they pass away.

If parents have a child/children, they need a Will. If a parent dies and their child/children do not have another capable parent to take care of them, a family member or friend would need to apply to the court to be appointed as the child’s/children’s guardian. This is an enormous emotional and financial burden to place on surviving family and friends, not to mention the minor child/children. Maybe some parents want to leave nothing to some children. This must also be made clear in a Will.

The five main reasons why a parent should make a Will are:

1.         Guardians for minor children
People have their own perceptions of life and feel different about things like discipline, religion, medical care, education, etc. Parents should give thought as to whom they want to raise their children should they pass away. Someone they trust who will continue to instill the same values that are important to them. Obvious choices are not always the best choices. Grandparents are an option, but children are exhausting, even for younger people. There may be other family members, but do they live nearby so as not to disrupt the children’s lives further after such a tragic event? This is a serious matter that deserves serious consideration. Parents must think about this and choose suitable guardians for their minor children in case they pass away. This is a major concern that must be addressed in a Will.

2.         Partner protection
Currently in South Africa, the surviving partner in an unmarried live-in or life partnership is not automatically entitled to any of the deceased partner’s estate when he/she passes away. This situation will, however, change in the foreseeable future because the Department of Home Affairs is in the process of proposing changes to the marriage laws in South Africa to address the changing needs of society. The white paper with clear policy proposals was submitted to Cabinet for approval on 31 March 2022. Should approval be granted, changes to legislation around marriages could be implemented as early as March 2023. But the questions still remain if the surviving partner will be able to pay rent, or make bond or car payments? When one income is no longer there, will they be able to afford childcare or school fees or any other standard expenses? Even if they are married, the spouse will still not necessarily get everything. Therefore, it is important to draft a Will in which they specify exactly what their wishes are.  Leaving the whole estate to a spouse is an enormous saving in taxes as this legacy does not attract estate duty.

3.         Child protection
Maybe a person does not want their partner to inherit their whole estate. Almost everyone wants to believe that their partner will mourn them forever, never loving another again, but there is a good chance that a partner will find someone else and make the new partner their heir. In such an instance, someone might prefer to leave a portion of their estate to their children, a nest egg that the second spouse will not be able to touch. Even the deceased’s parents may need care as they grow old and, without a Will, the parents do not have a claim to the estate unless they are unmarried with no children. Special provision can be made for parents via a testamentary trust as well, when there is a Will in place.

4.         Nominate an executor
It is important to nominate someone who will assume responsibility for the distribution of the estate’s wealth after death, to ensure that everything goes according to the plans as set out by the testator. A Will enables a parent to nominate a trusted company such as Legatus Trust, to oversee and execute the conditions of the Will. If no executor was nominated in a Will, the Master of the High Court will appoint an executor, and without a Will, the estate will be administered according to the Intestate Succession Act 81 of 1987 as amended, which can have dire consequences for the family unit left behind. Intestate administration was discussed in detail in Newsletter 23 of October 2018, which can be viewed on our website, www.legatus.co.za, under Blog → Historic Newsletters.
5.         Family disputes
The court rolls are full of cases of family disputes regarding inheritances. By making a Will, this can be prevented. Wishes can be made clear and be fair at the same time, and not leave a legacy of bitter fights between relatives. Maybe there is a family heirloom that should be left to one of their siblings, rather than the spouse. Or the deceased wants to make provision for stepchildren to also benefit from the estate together with the deceased’s biological children. Whatever the scenario, it can be addressed if there is a Will where their wishes are clearly and properly recorded.
Remember that it is never too early to make a Will. For a parent it is not an option to think “there is still plenty of time to make a Will”. The consequences of dying intestate (without a Will) can be devastating for those left behind. People pass away every day, young and old. The wisest decision is to prepare for such an event to make things easier for the loved ones left behind. Thus, parents should make a Will as soon as possible. It should not be put off until later because later can just be too late. A Will gives a person the freedom to choose how their assets must be distributed between their loved ones. It is the one thing that they can control when they pass away.

Today it is common for people to donate their bodies for medical research purposes. In 1769 though, it was a very unusual request as, at that time, the dissection of a body was an after-death criminal punishment. At the age of 21, Jeremy Bentham was already considering how his corpse could have a purpose after his death.

Bentham was a lawyer, but pure law frustrated his intellect and he evolved into quite the thinker and philosopher, becoming a man that was ahead of his time in so many ways. His legacy, which
seemed outrageous at the time, included utilitarianism, the promotion of individual rights, freedom and even animal rights, the segregation of the church from political influence, the abolition of slavery and the death penalty, the acceptance of homosexuality and the criticism of corporal punishment on children.

Bentham requested that his body be left to medical science. A week before he died in 1832, well into his eighties, he drafted his Will. In his Will, he said: “Preserve my body with the utmost of your skill. And put me in the library, that folks may see me still, a hundred years from now”.

After the dissection of his body, his head was re-attached to his skeleton, his body stuffed with hay, dressed up and placed in a glass cabinet for all to see him as his Will had requested. On several occasions the cabinet was rolled out to various meetings hosted by his known friends. He sat at one end of the table and the minutes recorded: “Jeremiah Bentham, present but not voting”.

Until next time!
“The Legatus Times” Team